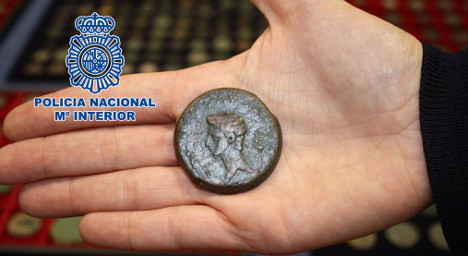 The brown bronze disc bearing the portrait of Augustus, the Roman emperor who conquered parts of Spain, was the most important of the 867 such coins seized. Photo: Spanish Police/AFP

The brown bronze disc bearing the portrait of Augustus – the Roman emperor who conquered parts of Spain – was the most important of the 867 such coins nabbed.

"The collection is very important as much for its economic value as its historic, artistic and cultural importance," said Antonio Tenorio, chief inspector of the expert cultural heritage brigade that recovered the coins.

Police arrested a gold dealer in Madrid in connection with the case. Along with jewellery, the coins were stolen by burglars who broke into the home of a private collector in Madrid last April.

Tenorio said the Augustus coin was minted to commemorate victories against the northern Iberian Cantabrian and Asturian tribes.

"It is quite heavy and is one of the biggest ones ever seized. It seems to be a unique piece," Tenorio said. "There is not another one like it known in the world."

A police statement said the collector got hold of the coin in 2002 at an auction house in New York for €30,000.

The coins were seized in separate raids at the gold dealer's shop in Madrid and an auction house in Barcelona, it said.

It described the coins as imperial "Ibero-Roman" ones minted in the first centuries BC and AD.

Police said they issued an international alert of the theft and the coins were identified after the suspect took some of them to the auction house to be sold.