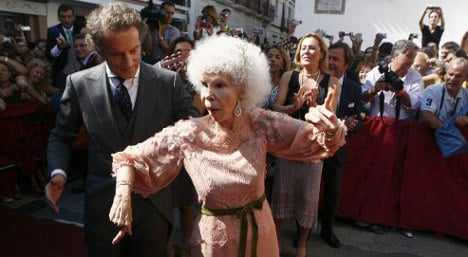 The Duchess of Alba struts her stuff at her wedding in Seville in 2011. Photo: STR/AFP

Rateau's collection, which Christie’s describes as being “creations of infinite poetry and of exceptional quality”, goes under the hammer in Paris on May 23rd.

The auction house has estimated the overall sale will reach approximately €8 million, with pieces like a large dark green 'aux oiseaux' floor lamp and a low table going for a snip at a mere €2 million each.

The Alba family has put the pricey pieces up for grabs in a bid to safeguard the rest of the "house's patrimony" which includes artwork by El Greco, Rembrandt, Van Dyck and Goya.

The pieces are said to be the last evidence of the splendours of the Liria Palace in Madrid, which was almost entirely destroyed during the Spanish Civil War.

A spokesperson for the Alba house told daily newspaper ABC that none of the pieces are part of the historic Alba collection or bare any relation to Spain’s history.

Cayetana Fitz-James Stuart, commonly known as the 18th Duchess of Alba, holds the Guinness World Record for the biggest number of titles with over 40 titles, more than any existing monarch or noble in the world.

The surgically enhanced aristocrat made headlines in 2011 for remarrying at the age of 85 to a civil servant 24 years her junior.