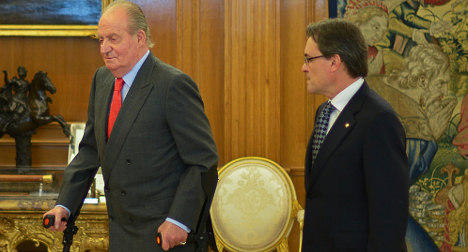 These are tough times for Spain's King Juan Carlos.

Health issues and high profile scandals involving members of the royal family have been taking their toll recently.

And to make matters worse, prominent figures within Spain are now calling for Juan Carlos to throw in the royal beach towel.

On February 22nd, the royal household came out on the front foot and said the king had absolutely no plans to abdicate. The country’s main two political parties were then quick to come out in support of the current monarch .

But there's not doubting that the abdication issue is now very much alive.

This week, The Local outline four reasons in favour of the the king's resignation.

Argument 1: Spain needs a fresh face at the helm

Nearly 40 years ago, King Juan Carlos helped lead Spain out of the wilderness of the Franco years and into the promised land of European democracy. During the so-called ‘Transición’, or Transition, the young royal provided a stable focal point for the troubled nation.

Navarro, leader of the PSC – the Catalan wing of Spain’s opposition PSOE party  – highlighted “the magnificent role” played by Spain’s King during the first transition.

But the socialist politician and “avowed republican” also stressed the country was now entering “a new era” and undergoing “profound changes”. And for Navarro this “democratic regeneration” also means a new king.

She was referring to are a number of scandals including the king's ill-fated trip in Botswana in 2011 during which the monarch – then honorary president of the Spanish branch of WWF – fractured his hip while hunting elephants.

Then there was Juan Carlos' ambiguous relationship with the German princess Corinna Sayn-Wittgenstein who accompanied him on his Botswana jaunt, and who has been described by El Pais as a “close friend” of the king.

The princess herself has denied any rumours of a romantic attachment with Juan Carlos but a new book doing the rounds about Spain’s Queen Sofia alleges that the monarch is a serial womanizer.

One scandal, though, is hitting the Spanish Royal House harder than of all the others: the involvement of the king’s son-in-law Iñaki Urdangarin with a charitable foundation called the Nóos Institute.

Urdangarin – the husband of the king’s youngest daughter Princess Cristina – and his colleague Diego de Torres are suspected of having diverted funds from the charity to various account across Europe.

No one knows if the King Juan Carlos knew about Urdangarin’s activities. But the royal family are clearly trying to open a chasm between themselves and Urdangarin and have even removed his profile from the royal website. The damage may already have been done.

During the chat, the monarch told journalist Jesús Hermida that he was "in great shape" and that he had "energy". But King Juan Carlos' has been getting around on crutches for quite some time now and there have been falls as well.

The king has actually undergone 12 operations since the 1980s, including three hip surgeries, according to El Mundo newspaper. He is also set to go under the knife again in early March, this time for a herniated disc.

Perhaps, then, it might be better for Juan Carlos to put his feet up for a while.

Argument 4: Felipe is ready to step into the breach

In August 2012, El Público columnist Arturo González argued the king should resign and said at the same time that Prince Felipe was "sufficiently prepared" to take on the role of king.

Indeed, like the UK’s Prince Charles, Felipe has received a lifetime of training for his country’s top job. Unlike his British counterpart, however, he remains a scandal-free golden boy.

Felipe de Borbón remains very popular, and this has only been enhanced through his marriage to the beautiful Letizia.

There is also very little question that the king’s only son is dedicated to his country. In January, El Pais quoted Felipe from 1999: “Being royal is an office with only one objective: to serve the Spanish people."

Last but not least, Felipe is in the prime of life. At the age of 45, he has many good years ahead of him. Given his father’s uncertain health, this is no small advantage.