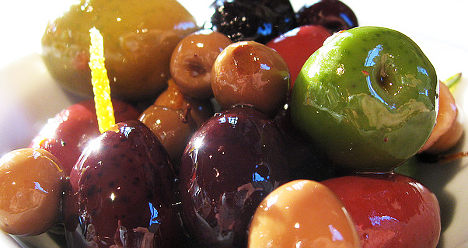 Olives and nuts boost heart health say Spanish researchers. Photo: Steve Jurvetson
It's official: despite all those late nights spent worrying about the crisis, Spain can still be good for your health.
The results of a major new Spanish study just published in the prestigious New England Journal of Medicine show that the so-called Mediterranean diet boosted with nuts or extra-virgin olive oil can reduce the risk of heart attacks and strokes by up to a third.
The long-running Predimed study collected data on close to 7,500 older people at high risk of heart disease over the last ten years to assess the benefits of the Mediterranean diet.
Over the last five years of the study funded chiefly by Instituto de Salud Carlos III participants ate either a a Mediterranean diet enhanced with extra-virgin olive oil or a a Mediterranean diet supplemented with nuts. They were then compared with a control group.
The study involving 200 research centres around Spain found that both the nut-enhanced and the olive-enriched version of the diet led to a 30 percent decrease for strokes and heart attacks.
According to El Pais, people taking part in the study chowed down on a diet made up of 10 grams of extra virgin olive oil a day, 10 grams of refined olive oil, 25 grams of dried nuts, 125 grams of both fruit and vegetables, 60 grams of wholemeal bread, 60 grams of refined cereals or potatoes, 40 grams of pulses, 125 grams of seafood or fish, 150 grams of meat or meat products, 50 grams of sweets or pastries, 200 grams of dairy products and around 9 grams of alcohol.