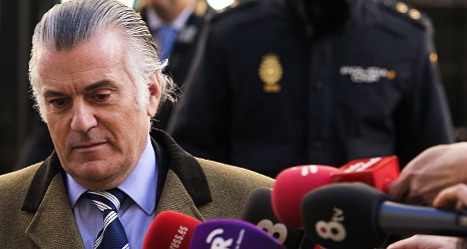 Luis Bárcenas was stripped of his travel document after a three-hour grilling in court over millions of euros he held in Swiss bank accounts.

In the case linked to Monday's hearing, Bárcenas is accused of hiding €22 million ($29 million) in Switzerland away from the Spanish taxman, according to judicial sources.

Spain's National Court ordered the former money man not to leave the country because it considered him a flight risk, and to check in at the tribunal every two weeks, in a written ruling released Monday.

It said the judge was investigating "numerous indications of suspected offences against the public treasury and administration and money-laundering".

State prosecutors said in a separate statement that "these indications are supported by the existence of accounts in Switzerland with a very large amount of money, the origin of which is subject to investigation."

Bárcenas told the judge that he had earned the money he held in Switzerland through property and stock investments and art dealing, said sources among the plaintiffs who asked not to be named.

Bárcenas has been under investigation since 2009 in the so-called Gurtel case, a complex probe into alleged backhanders paid for public contracts, implicating Popular Party politicians.

In a separate affair, he is alleged to have secretly channelled money to Rajoy and other top Popular Party members, according to reports last month in the leading newspapers El Pais and El Mundo.

Those allegations rattled the governing party as Rajoy pushes through sensitive reforms that he says are crucial to stablize Spain's crisis-hit public finances.

Sources said that Bárcenas, during his questioning on Monday, denied holding on to donations made to the party while he was treasurer.

Rajoy and the party have denied receiving any undeclared payments. The allegations prompted public prosecutors to open an investigation into the party's financing.

On Tuesday, El Pais reported that the sum held by Bárcenas in Switzerland was higher, at €38 million.