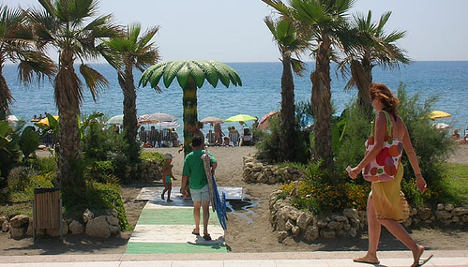 They are drawn by the country's mix of pleasant weather, sandy beaches, historic monuments and cultural attractions such as the Prado museum in Madrid and Antoni Gaudi's Sagrada Familia church in Barcelona.

Roman Gavrilenko, a 26-year-old elementary school psychologist from Murom in western Russia, visited Barcelona, Valencia, Toledo and Madrid with 11 other Russians during a one week tour of Spain.

Spain was the only Western European nation he hadn't visited and he now says he plans to return with his grandmother.

"People are very friendly. The Sagrada Familia was really, really impressive. It was psychedelic, it made my head spin," he said as he sat in the lobby of Hotel Florida Norte near Madrid's royal palace after completing a tour of the city.

The number of visitors from Russia surpassed one million last year for the first time, totalling 1,206,227, a 39.8 percent jump over 2011 and double the amount that arrived in 2010, according to tourism ministry figures.

Tourism officials credit a rise in the number of direct flights to Spain, easier visa rules, and the growing appetite of Russia's rapidly expanding middle class for foreign travel.

The Arab Spring uprisings have also played a role as Russian holidaymakers are shunning cheaper rival sunshine destinations in Egypt and Tunisia.

Spain is also reaping the rewards of having been one of the first countries to energetically target the new Russian market that emerged after the Soviet Union collapsed in 1991, said Igor Rotenshteyn, president of the Terramar Group tourist operator which last year brought about 100,000 Russians to Spain.

"During the Soviet era very few Russians had the privilege of travelling abroad. When Russia opened up to the world, Russians did not have any experience of travel and Spain was one of the countries that was most active in trying to capture clients," he said.

Over half of all Russian visitors to Spain head to Catalonia.

During the peak summer season Russians are now the most numerous tourist contingent in many resort towns in the northeastern region, knocking the British from the top spot.

"This was unthinkable a few years ago," said Salou's town councillor for tourism, Benet Presas.

The surge in Russian visitors offset a fall in the number of visitors from Italy and the Netherlands last year and has helped fill hotel rooms at a time when Spaniards are cutting back on travel due to a recession that has driven the unemployment rate to a record 26 percent.

While Russians accounted for just 2.1 percent of the 57.7 million foreigners who visited Spain last year, they spent more than any other nationality. Russian tourists are big spenders at high-end retail stores like these ones in Marbella's luxurious Puerto Banús. Photo: Basel Chakour/Flickr

"They are the tourists that spend the most so it is not just a question of the number of visitors, but also of their purchasing power," said Jose Luis Zoreda, the vice-president of Exceltur, Spain's main travel industry body.

Day trips to Barcelona to go shopping in the city's high-end stores are popular with Russians staying at Catalan beach resorts.

"Good brands are cheaper here and there is more variety," said Irina Belgova, a 36-year-old office worker from Moscow before heading to a flamenco show with her husband while on a recent visit to Madrid.

She bought several handbags and dresses during her vacation in Spain.

Menus and signs in Cyrillic letters are common sites at Spanish tourist resorts alongside those in English, and hotels are teaching staff Russian.

"All our employees in all sectors, reception workers, waiters, maids, speak a bit of Russian. It's obligatory," said Bruno Lopez, the commercial director of the Gran Palas hotel in La Pineda, near Salou, whose clients are now mostly Russians.

"National tourism is really hurting due to the crisis and we are taking this opportunity to compensate for the fall with these tourists," he added.