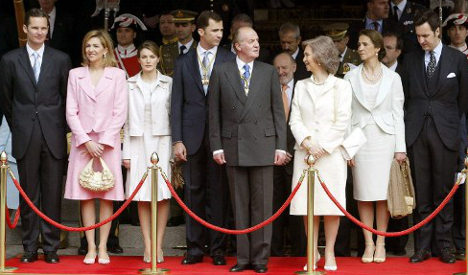 Happier times for Urdangarin, pictured far left at a military parade with the Spanish royal family back in 2004. Photo:Rafa Rivas/AFP

Urdangarin, husband of the king's youngest daughter Cristina, was questioned by a judge investigating allegations that he embezzled millions of euros of public money paid to Nóos, a charity he managed.

"The royal family did not give its opinion on, advise or authorize the activities of Nóos," Urdangarin told the judge, according to a copy of his declaration published by Spanish media.

Urdangarin's former business partner Diego Torres last weekend reportedly told the judge that the palace oversaw the activities of the company, from which Urdangarin quit as chairman in 2006.

The former Spanish handball player and Torres are suspected of syphoning off money paid by regional governments to the Nóos Institute, based on the island of Majorca, to stage sports and tourism events.

Both men have denied any wrongdoing and have not been charged with any crime. The judge is investigating the case with a view to possibly putting them on trial.

The royal palace sidelined Urdangarin from its official functions when the affair erupted in 2011, but has failed to prevent it reaching the palace itself.

Spanish newspapers citing unnamed sources in the case said Torres named Cristina as a decision-maker in the running of Nóos.

He reportedly handed the judge emails which appeared to indicate that the king backed and closely followed his business career.

The emails have reportedly been added to the investigating judge's file.

Carlos Garcia Revenga, the longtime secretary of Cristina and her sister Elena in the palace, was questioned after Urdangarin on Saturday by Jose Castro.

He too tried to distance the royal family from the affair, declaring that neither he nor Cristina took part in managing the company despite being named among its directors, Spanish media said.

Urdangarin made no comment to reporters when he arrived at court nor when he left after his four-hour closed-door hearing.

A crowd of protesters massed near the court yelling in rage at the alleged corruption, which has fanned public anger at a time of economic hardship.