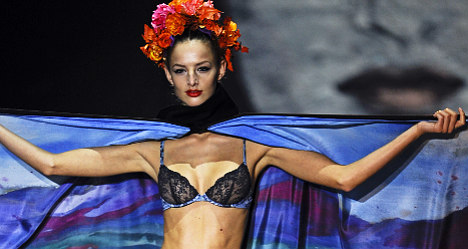 The country's fashion houses are placing particular emphasis on new markets in Europe and the United States and in emerging economies.

"No two countries are alike, each has its own characteristics and you have to adapt," added Sarda, whose brand exports mainly to Europe but also to the United States, China and Russia.

Andres Sarda, Nuria's father, presented his latest collection on Tuesday at the twice-yearly fashion industry event which showcased work made by around 30 designers.

Among those who showed their works was Agatha Ruiz de la Prada, whose colourful and bold designs have made her one of Spain's best-known creators.

Models for luxury jewelry brand Aristocrazy meanwhile wore sumptious necklaces that descended down to their waists, over black sheath dresses in a cathedral setting.

The Suarez Jewelers Group behind Aristocrazy launched the ready-to-wear jewelry line in 2010 in Spain and is preparing to make the leap to new markets.

The brand has projects underway in neighbouring Portugal as well as in Chile, Colombia and Mexico to respond to the "global interest" which the line has sparked, said 28-year-old Aristocrazy director Juan Suarez.

It promotes itself mostly through blogs. Aristocrazy works with New York-based blogger and fashion photographer Scott Schuman whose fashion website The Sartorialist is considered a major influence on industry trends.

"The brand has invested a great deal in this world. You get opinions about the product from people which are very direct and real," said Suarez.

The value of Spanish textile exports hit a new record in 2012, surpassing €10.35 billion ($13.6 billion), an increase of 8.0 percent over the previous year, according to the Information Centre for Textile and Confection.

Clothing exports were fuelled by the success of companies such as Inditex, the world's biggest clothing group, and Catalan high-street clothing chain Mango.

"We must not forget that the Spaniards, with Inditex, Mango, Desigual and other companies are world leaders in clothing, which brings widespread international recognition," said Borja Oria, the president of Acotex, an association of textile and accessory companies.

Exports of the brand have soared and now account for 75 percent of total sales, against 45 percent before the start of Spain's economic crisis in 2008 due to the collapse of a decade-long property bubble.

The brand takes part in Paris fashion shows to project its image worldwide and its main markets are Japan, Brazil and the Arab countries such as Kuwait, the UAE and Saudi Arabia, she added.

"Movement is happening elsewhere. There is no life here," said Ayats.

Europe is the main destination for Spanish clothes exports but with the continent stuck in recession Spanish designers have turned their eye on emerging economies.

Spanish designers should not be afraid and should use new technologies for their expansion, she added.

"It is never too late," said Sarda.