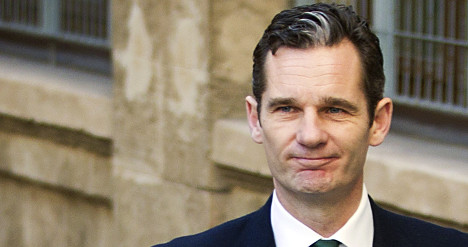 Iñaki Urgandarin has landed himself in hot water through his charity work in Spain. Photo: Pedro Armestre/AFP Jaime Reina

Um…is Iñaki even a real name?

Yes, very much so. It's the Basque form of Ignacio, or Nacho for short.

Right. So who is this Mr Urdangarin guy then?

He’s the 44-year-old husband of Princess Cristina of Spain, who is the youngest daughter of King Juan Carlos and Queen Sofia. Urdangarin and the princess also have four children of their own, three boys and a girl.

So he's the king’s son-in-law?

Exactly. He’s also the Duke of Palma de Mallorca, to give him his full title and dues.

And has he actually done anything with his life – apart from marrying a royal, I mean?

Well, he was a key part of Spain’s national men’s handball team and he even won a couple of Olympic bronze medals for the county. He was their handball captain at the Sydney Olympics in 2000.

And why is he the Spanish face of the week?

He's got himself caught up in a high-profile scandal of late.

That rings a bell. Wasn't it something to do with shooting elephants in Botswana?

Hmm. That was the King of Spain actually. But no, I’m referring to a different scandal. Urdangarin has been making headlines because of his involvement in the Nóos Institute.

I've never heard of it.

It’s a charitable foundation that Urdangarin headed up from 2004 to 2006. The money for the institute was supplied by regional governments and went towards putting on sporting and cultural events. But it seems that Princess Cristina’s husband and his colleague Diego Torres may have been diverting funds to banks accounts around Europe.

OK. Since you ask, the two men are accused of siphoning off some €5.2 million in cash to bank accounts around Europe. A civil case has been launched against both Torres and Urdangarin with bond posted at €8.2 million. They chose not to pay the bond but because it’s not criminal case, the gents won’t have to sleep in a cell. But the Spanish authorities have begun freezing their assets.

Heavens. So is the son-in-law-guilty?

That’s what the courts are trying to figure out. Urdangarin says the whole affair can be put down to “irregular accounting” on Torres’ part.

And what does Torres say?

Here’s where the plot thickens. During a seven-hour grilling by judges in Palma last week, Torres says the royal son-in-law knew about what was going on all along, and says the extensive email archive in his possession proves just that. The police, however, are still ploughing through all of this electronic information and the judges don’t yet know what roles the emails might play in any eventual outcome.

It all sounds very messy.

Indeed. Some commentators are even bandying about the idea that Princess Cristina or even the King knew something of what was going on over at the Nóos Institute. At this stage though, it looks like the incriminations might only lead to the door of the secretary of the royal princes and princesses, a certain Carlos García Revenga.

The royal family can't be too happy.

Not particularly. Although they’ve closed ranks publicly, Urdangarin’s name has been taken off the royal website. He also seems to have aged considerably in the last few years. And it hasn’t helped much that he has been signing his personal correspondence 'duque em-palma-do' or the  – erm – erect Duke.