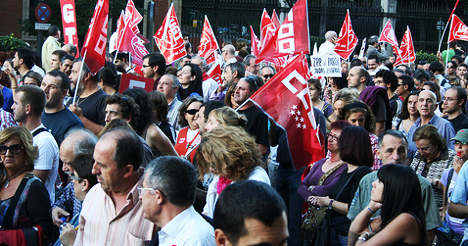 Nurses, doctors, students, miners and members of Spain's 'indignant' movement against economic inequality are set to join in the so-called 'citizens' tide' against the steep spending cuts and tax hikes imposed by Prime Minister Mariano Rajoy's conservative government to slash the public deficit.

The day of protest coincides with the 31st anniversary of the failure of right-wing military coup that sought to crush Spain's young democracy and restore military rule.

"We are facing a real financial coup, that is why we have chosen this date," Paco Segura, spokesman for one of the organizing associations, Ecologists in Action, told a news conference.

"Today our democracy is also threatened, that is why we protest to demand a true democracy where people can decide their future," he added.

The austerity measures, which include tax hikes and cuts to public workers' pay, have fuelled anger in a country grappling with an unemployment rate of 26 percent, comparable to the United States in the Great Depression.

The discontent is aggravated by the fact that while public services are being cut, the banking sector — undermined by the collapse of a property bubble in 2008 — received European aid worth over €41 billion.

"We will not allow them to continue to attack our social rights with these savage cuts to feed, with the revenue that they generate, the avarice of the banking system," said Segura.

Rajoy defended his government's record during a state of the nation address in parliament on Wednesday, saying it had saved Spain from economic disaster.

"We have left behind us the constant threat of imminent disaster and we are starting to see the path for the future," he said.