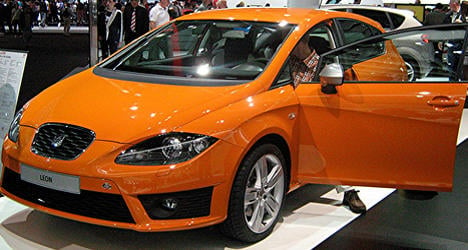 Hot stuff: a gleaming Seat Leon at the 2009 Frankfurt car show. Photo: Timo Beli
The study puts the evergreen Seat model at the top of thieves' wish lists while the Volkswagen Golf and the BMW Series 3 grabbed second and third spot in the country´s auto theft stakes.
The new research also reveals that the provinces of Madrid, Toledo and Alicante are the nation's hotspots for this crime with Madrid province alone accounting for one in every eight car thefts in Spain.
At the other end of the spectrum, Cuenca, Lugo y Cáceres are the safest place to leave your car parked up for the night.
Grand theft auto is pretty constant all year round in Spain but the start of summer seeks a small spike with 9.6 percent of all car robberies taking place in that month. Meanwhile, September is the quietest month with just 7 percent of all thefts.
It looks like Spain's criminals like weekend breaks too: 15.9 percent of their activity falls on a Saturday. Meanwhile, the seventh day seems to be one of rest with Sunday's 12.4 percent the lowest figure of the week.
The Línea Directa study looked at 8,435 incidences of car theft nationwide.
Some 50,000 cars are stolen every year in Spain and only 39 percent are ever recovered.
Robberies of automobiles add 5 percent a year to insurance costs for Spanish motorists said Francisco Valencia, Director of Corporate Governance at the insurance firm.

PARTNER CONTENT
Have you fallen down the self-diagnosis rabbit hole?
Url copied to clipboard!