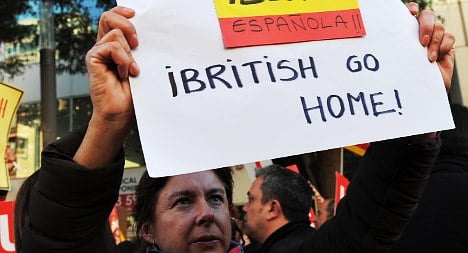 An Iberia staffer in Barcelona on Wednesday protests against job cuts at the flagship carrier. Photo: Lluis Gene/AFP

To the din of horns and smoking firecrackers, workers massed outside the company's headquarters, waving red and yellow Spanish flags and signs such as "Get your dirty hands off Iberia" and "British go home".

That was a reference to British Airways, which merged with Iberia in 2011 to form the International Airlines Group (IAG), in a tie-up aimed at slashing costs.

Cabin crew, ground staff and maintenance workers responded by announcing three five-day strikes, the first of which kicked off on Monday.

IAG said it was open to talks with unions during a 30-day consultation process but did not appear to have budged on the job cuts.

"The management does not want to negotiate, they say their hands are tied," said one protestor on Wednesday, Federico Castro, 68, a retired Iberia flight steward.

He said he was demonstrating for his son, 32, who is also an Iberia steward and now risks losing his job.

"This is a total dismantling of the company by British Airways," said Castro. "They are turning Iberia into a low-cost airline for the benefit of British Airways."

Striking Iberia workers clashed with baton-wielding riot police on Monday at Madrid-Barajas airport, where thousands of strikers tried to force their way into Terminal Four.

Iberia workers also plan to strike from March 4-8 and again from March 18-22, with a minimum service operating.

The flag carrier said it scrapped 415 flights across Spain and Europe for this week. At least 273 flights were cancelled on Wednesday, said El Pais.

Iberia says it is obliged to cut costs since the economic downturn and the rise of low-cost competitors has caused heavy losses.