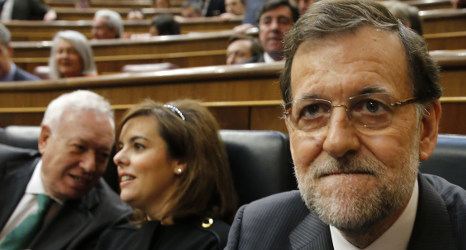 During the key speech, the conservative 57-year-old leader  Spain's Prime Minister Mariano Rajoy insisted his country did not suffer from "generalized corruption", in the wake of a scandal rattling his ruling party.

"It is not true that there is a generalized state of corruption in Spain," he told parliament in his first state-of-the-nation address.

"Spain is a clean country going through tough times in which cases of corruption emerge just like in any other," Rajoy added.

"The exceptions are representative only of themselves, as in any place where bad weeds grow."

He proposed to introduce tougher criminal penalties for corruption and other reforms to corruption law.

Rajoy has faced calls to resign over a corruption scandal battering his ruling Popular Party.

He has rejected as false account ledgers published by El Pais newspaper that purportedly showed undeclared payments to him and other members of the conservative Popular Party.

It was the biggest in a series of scandals implicating numerous politicians. It sparked anger among Spaniards at a time when they are being asked to make sacrifices with lower salaries, benefit cuts and lost jobs.

An online petition calling for Rajoy's resignation and snap elections, posted on change.org, has garnered more than 1.1 million signatures.