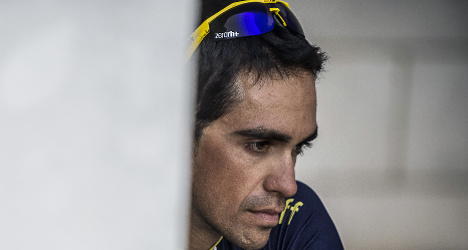 A pensive Alberto Contador awaits the kick-off of the fifth stage of the Tour of Oman on February 15. Photo: Jeff Pachoud/AFP

Sainz is on trial along with four others, including the principal accused Eufemiano Fuentes, for endangering public health by green-lighting blood transfusions.

"Looking at how the process is developing, I will not call Alberto Contador as a witness," the cyclist's lawyer Ignacio Arroyo told reporters.

Contador was all set to testify on Friday, but Arroyo claimed his decision not to call the Spaniard was a sign the case was going well for his client.

"Looking at how things are developing every day during the case, I believe that certain things are on the right path with respect to my client."

On Monday the court heard that the doping substance Synacthen found in his residence when he was arrested along with Fuentes in 2006 was in fact given to the team by the Spanish Medical Agency.

In another twist in the trial, though, the judge, Julia Patricia Santamaría, confirmed that another cyclist due to testify on Friday, Angel Vicioso, cannot be located.

Watch Contador's victory in the 2010 Tour de France below: