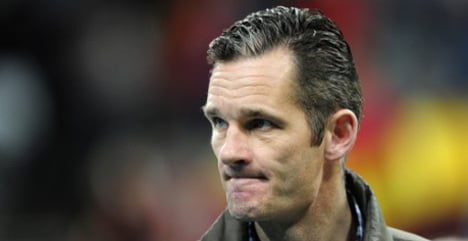 Urdangarin and former partner Diego Torres are suspected of syphoning off millions of euros paid by regional governments to the Noos Institute, a charitable organisation which the husband of Princess Cristina chaired from 2004 to 2006.

The money was meant to cover the cost of staging sporting and tourism events.

Both men have denied any wrongdoing and have not been charged with any crime.

The revelations are embarrassing for the royal palace which has tried to mark a clear border between Urdangarin's business affairs and the royal family, especially Princess Cristina, since the scandal erupted at the end of 2011.

The royal family sidelined Urdangarin, who acquired the title of Duke of Palma in 1997 when he wed Cristina, from all official royal activities at the end of 2011 and last month he was removed from the family website.

The 45-year-old former Olympic handball player was jeered in February last year when he appeared in court to be questioned for the first time as part of the probe.

He will be grilled again at the court in Palma on Saturday, the same day that Carlos Garcia Revenga, secretary to the king's daughters Elena and Cristina is set to be questioned in the case.

Revenga will be questioned about his role at the Noos Institute and "his possible work as an advisor" to Urdangarin, the court source said.

The palace has said it would keep Garcia in his post and would take no action until he goes before the judge.

Earlier this month the court said it would begin freezing assets belonging to Urdangarin and his former business partner after they missed a deadline to pay bail of €8.2 million.

Since the bail was applied in a civil case the two will not go to jail for not paying the sum.