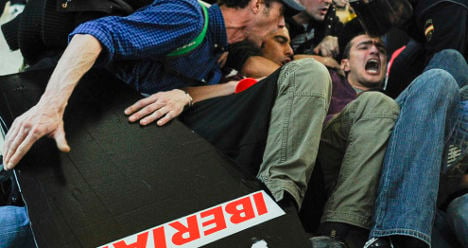 Thousands of strikers tried to force their way into one of the terminals at the airport before being pushed back by police, an AFP reporter at the scene said.

After several charges by police armed with batons, the Iberia staff finally entered the terminal where they carried on a protest during the strike action, which led to hundreds of flight cancellations.

Iberia's cabin crew, ground staff and maintenance workers are striking from Monday to Friday this week in the first of a series of three five-day strikes to protest plans to axe 3,800 jobs.

The flag carrier said it scrapped 415 flights across Spain and Europe for the week including 81 on Monday alone. The airline said it expected to operate 135 flights on Monday.

Vueling said it had cut 354 flights for the five days, or 39 percent of its usual service. A list posted on the airline's web site showed 78 cancellations for Monday alone.

Iberia workers also plan to strike from March 4–8 and again from March 18–22 to protest against the job cuts announced by International Airlines Group (IAG), which owns Iberia and British Airways.

IAG announced last week that it would axe 3,800 jobs at Iberia to save costs but sait it was still open to talks with unions during a formal 30-day consultation process.

The airline aims to cut its capacity by 15 percent this year, eliminating some loss-making routes to Latin America and trimming its fleet by 25 aircraft, including five long-haul jets

Iberia said there were no significant incidents during the first day of the strike action, with 85 percent of passengers already put on other flights and the other 15 percent reimbursed.

See footage of the clashes below.