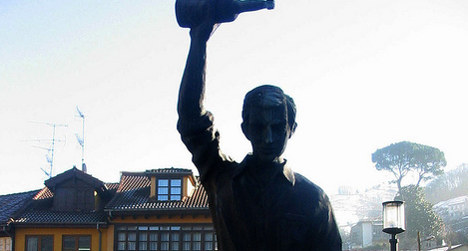 The dishwasher at the well-known El Lavaderu cider bar in Gijón is facing 14 counts of poisoning, said the region's El Comercio newspaper this week.

In a case that the paper described as something out of a crime novel, the kitchen worker is suspected of serving up a nasty splash of calcium cyanide with the restaurant´s dishes for as long as eight years.

The substance is commonly used in the treatment of drug addiction and alcoholism. But when it is mixed with alcohol, it can cause everything from heart arrhythmia to nausea and anxiety. Over longer periods, heart attacks and multi-organ failure are also possible.

The alarm bells in this case first rang back in May 2011 with the death of the chef at El Lavaderu — a man who went by the nickname of Juan El Pistolas (or Pistol Juan). An autopsy after his death revealed large quantities of calcium cyanide. But the chef hadn't been undergoing any drug or alcohol treatments.

Police soon discovered that other staff at the restaurant had been suffering from mystery health issues as well. These problems only cleared up when those workers hung up their tea towels and stopped working at the restaurant.

According to El Comercio, one of the restaurant's waiters even ended up in hospital three times.

One local hotelier described the suspect as a normal fellow who didn't cause problems. "We can´t believe he has a story like that behind him and that he was intentionally trying to slowly kill his workmates," he told the Asturian daily.

If that is the case, the charges against the man – known for legal reasons only as Andrés Avelino F.F. – could soon be boosted to attempted murder.