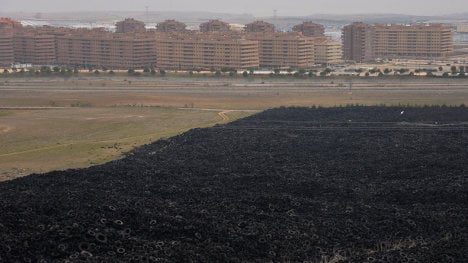 The small town of Seseña – about 50 kilometres south of Madrid – is renowned for its endless rows of empty apartment buildings put up during Spain's property boom.

Developers put up the buildings here starting in the late 1990s, hoping to draw tens of thousands of people to buy homes on Madrid's southern fringe. Now Seseña has become a near ghost town, a symbol of Spain's economic fall since the boom went bust in 2008.

And there is another challenge for the town: a huge, unsightly mountain of old tyres.

The massive pile started to form in the 1990s when a company began using the 25-acre site as a temporary depot for old tyres due to be recycled, says the mayor of Seseña, Carlos Velazquez.

And Vicente Garcia de Paredes, an activist with environmental group Ecologists in Action says, "The visual impact is dreadful. The countryside is totally spoiled by this black mark".

The group also warns that disease-bearing mosquitoes may breed in the stagnant puddles that have formed in the hollows of the tyres.

Millions of tyres of all sizes and in all conditions lie in a huge dump, home only to rabbits and secured by a sole security guard.

The town of Seseña now lives in fear of the rubber heap catching fire.

"We are less than five hundred metres from a town of 10,000 inhabitants and the material is dangerously flammable," says Garcia from Ecologists in Action.

After the dump was declared illegal in 2003, the company that ran it was chased through the courts and it eventually abandoned the location.

In 2010 a judge ruled that the tyres were abandoned waste and the council was responsible for clearing them.

Finally, though, there's a solution. The town hall has signed a deal with a company based in Senegal that will spend three years milling down the tyres and trucking the bits off for recycling, said Velazquez.

The tyres are likely to be turned into building materials: surfacing for roads, sports tracks and children's playgrounds.